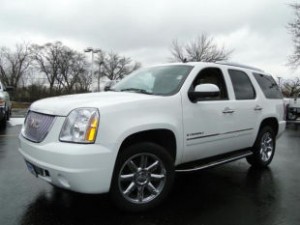 General Motors owns GMC, a division of the company that manufacturers primarily SUVs, vans and trucks. The GMC line is closely related to the Chevrolet brand especially mechanically. However, models with the GMC marque have exclusive features; minor styling differences and different trim packages, GMC’s full-size SUVs and pickup trucks are the most influential products for consumers in their model lineup. Many of GMC’s products in the categories of pickup trucks and SUVs are world-class.
Before it was GMC the company was founded in 1902 and was known as the Rapid Vehicle Motor Company. In 1909 General Motors bought the company planning on it becoming a GM division that would make heavy-duty commercial trucks. The line was renamed GMC Truck. Some of the first GM production models were the T16 and T20. The trucks were built for commercial use and were quite utilitarian. Most were used as dump trucks, fire trucks or military vehicles. The brand grew well during the 1920s and 1930s and during World War II acquired two more truck manufacturing companies. The war had great demand for GM products.
Following the war, GM began to focus more on consumers for the brand and introduced the Suburban – in essence a car built on a truck chassis. This was the first time a truck was blessed with the creature comforts of a car. Steady growth of the line from the 1960s through the present is partially due to the introduction in 1970 of the first sport utility vehicle, the Jimmy, a name known to many veterans as it was used extensively during World War II. During the 90s GM dropped truck from the marque and the division is known simply as GMC. GMC makes a broad line of vehicles that meets almost any need for a truck, van or SUV.
Carson Cars in Lynnwood, Washington has a large variety of GMC brand vehicles on their lot. When you buy a pre-owned car from Carson Cars it will come with a guarantee. Mike Carson who is the second generation of Carsons to operate this family owned business sell to his friends and neighbors. Every car gets a 111 point inspection. If a minor repair or adjustment cannot get the car standard it will not go on the lot – Mike values his reputation far too much and only sells the best cars in Lynnwood, Washington. As a large, award winning independent dealership, Carson also has access to a large network of car lenders. Folks with any type of credit are welcome at Carson Cars and will be financed.
If you are in the market for a used GME for sale in Lynnwood, Washington call Carson Cars now at 425-697-6969 or Toll free at 1-888-47-DRIVE. With a knowledgeable staff, a large selection of GMC vehicles and on-site financing, what could be easier than buying from Carson Cars?