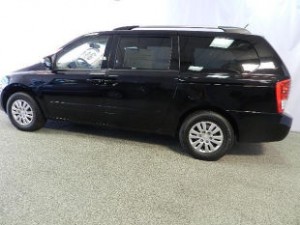 Kia is actually a Chinese word that means “to arise, to up out of Asia” and it has done exactly that as one of South Korea’s major car manufacturers.

The company began in South Korea in 1944 as a maker of steel tubing for bicycle frames and manufacturer of bicycle parts. In the beginning of the 1950s the company manufactured the first South Korean bicycle. Towards the end of the decade they began to manufacture motor scooters.

Kia Motors is considered a newbie to the American automobile scene. Its beginning in the United States followed a marketing strategy of offering cars to consumers that were less expensive than competing brands but better equipped. The brand continues to grow in North America by emphasizing value, technology and sporty looking and equipped cars.

Kia’s initial entry into the US retail car market was round about. First it provided Ford Motors with the 1987 Kia Pride that Ford sold as the compact Ford Festiva. In 1994 the Pride was replaced with the Aspire as Ford’s Festiva.

In the 1990s Kia began selling cars under its own marque in the United States and brought to the United States the Kia compact model Sephia. Introduction was slow and the car was only available in select western states. In 1995, Kia introduced its compact SUV the Sportage to get in on the SUV craze that was sweeping across America.

Kia was purchased by Hyundai in 1998. Hyundai is South Korea’s other major automaker. Since the merger the Kia lineup has increased dramatically and the car’s quality soared. Today, Americans buy the car for its reliability, value and sporty looks.

Every car is sold with a guarantee after passing an intensive 111 point inspection. Carson Cars helps those with troubled credit as it finances buyers in-house, they are the bank! Call Carson Cars now at 425-697-6969 or 1-800-47-DRIVE and get the Kia car you deserve now!