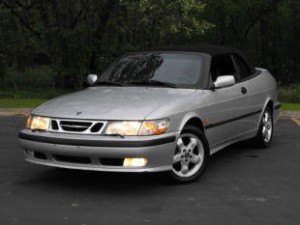 Founded in Sweden, the Saab brand began as the Svenka Aircraft Company. Saab launched its first cars in the 40s. The designs were well like for their aerodynamic lines.

Saab brought out the 96 in the 60s. This model led to an increase in worldwide popularity for the company. The sport coupe came out around the same time, achieving a strong reputation in the racing world. The coupe was renamed as the Monte Carlo 850 due to its racing success. By the end of the 60s the 99 and the Sonett II were also being built. They were designed with a plastic and fiberglass frame.

The 99 Combi Coupe debuted in the early 70s. It offered a folding rear seat and a hatchback body. The 99 Turbo and the 900 came out soon after. The Turbo offered car buyers its turbo technology and the 900 had an interior air filtration system.

By the 80s the Saab name had developed its popularity with the American car buyers. Saab then launched the 900 Turbo, Turbo Aero and the convertible, as well as the 9000. The 9000 was available as a sedan and a hatchback, and the Turbo Aero came equipped with a 16 valve turbo engine.

General Motors bought fifty percent of the the Saab brand in 1990. After the purchase the 900 was reworked to offer more safety components. By the end of the 90s the 9000 was replaced with the 9-5 which had whiplash reduction head restraints as well as ventilated seating.

General Motors owned one hundred percent of the Saab name by the turn of the millennium. Financial problems within GM forced the company to sell the Saab division.

The most current model produced under the Saab brand is the 9-3 Griffin. It has a choice of a wagon or sedan body style. The standard components on 9-3 Griffin include a manual six speed transmission, an inline 4 engine, a front wheel drive system, Bluetooth interface, satellite radio, a trip computer, a CD player, a seven speaker audio system, a cooling container, power adjustable seats, full power equipment, leather upholstery, remote entry, a tilting and telescopic steering wheel with sound and speed controls, twin region air management, and cabin air filtration.

Carson Cars is proud to provide you with a superb inventory of Saab for sale in Lynnwood, Wa. Come in, or call us today at 425-697-6969. We’ll answer all of your Saab questions and provide you with any type of financing you need regardless of your credit score.

We Love Our Customers!
Carlos was awesome very helpful and a good salesman . He went out of his way to bring me a spare which I appreciate lol .I’d highly recommend asking for Carlos when going to Carson cars
Raelyn Townsend
I had a negative situation that was very circumstantial. When I arrived at Carson cars I was not a very happy camper, after working with Jack and the management being very understanding of my situation we were all winners. 👍
Johnathan Been
Great people and very helpful. Carlos helped my fiance alot and made sure to help her get what she needed.
jakoboe 14
Jack showed me cars and was very helpful to show me around and set an appointment this Friday for me and my girl. Great experience!
Anthony G.
Jack was very helpful, he got us what we needed quickly, and he was always on top of things. We were on a tight budget and he helped us make it work.
for traffic
Jack coyle and Carlos helped me find the perfect vehicle! Very helpful! They even ensured that the car was working properly!
Jessica Sawchuk
Jack was incredibly helpful. He tried to stay within the price range I was looking for. He put me into a beautiful Buick. We tried out several vehicles, but I went with the Buick. He's incredibly friendly and listens to the needs of the consumer.
Cindy Robertson
Carlos helped me and my mom find the perfect SUV for us. He assured me Safety and reliability. He was very patient and very communicative. It was a great experience for us both!
karla vargas
(Translated by Google) Mr. Carlos was very kind and patient, he answered all the questions we had, he helped us checking the cars and advising us with the best, all the employees are very friendly, thanks for all the help 🙏☺️ (Original) El señor Carlos fue muy amable y pasiente nos contestó todas las preguntas q teníamos nos ayudo checando los carros y aconsejándonos con los mejores todos los empleados son muy amigables gracias x toda la ayuda 🙏☺️
Kenia Maciel
Jack Coyle has outstanding customer service, helped me get into a vehicle. I would highly recommend coming out to Carson cars and buying a car. Thank you Jack and all of the Carson cars employees.
Pierce County Copwatch