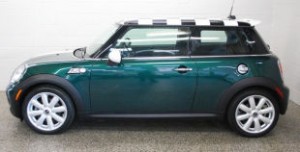 The Mini brand offers car buyers an enthusiastic ride in a small frame. The company started out in the 50s but did not become an official brand until 2002. The Mini cars of the new millennium come with lots of features and power, a spacious interior and a BMW chassis.

The British Motor Company originally owned the Mini division in the 1950s. At the time there was a fuel crisis and fuel rationing was taking place throughout the U.K. The Mini Cooper provided car buyers with a fuel efficient form of transportation that had space for four and required little space to keep.

In the 1960s the Mini brand of automobiles was manufactured out of the Austin and Morris divisions. The Cooper quickly became hit. Not long after, John Cooper added to the designs, developing the Cooper S. This model had a top power of 76 hp and was available in the U.S. The next year.

More Mini models were created throughout the 1960s, including the Moke and Pickup. A combination of the Mini and Jeep designs, the Moke was a success. The decade saw an infusion of the Mini brand, in fashion, cinema, art and advertising. By the end of the 60s more than two million were sold. The inability of the brand to meet the strict emissions requirement of the United States forced the company to end exports there.

The next two decades saw more success for the Mini in Europe. More than five million were sold around the world by the mid eighties. The brand was bought by BMW in 1994. BMW held off on production for about six years. In 2002 the Mini was once again exported to the U.S. The first introduction was the Mini Cooper hatchback which provided the BMW suspension as well as breaking ground brakes and steering.

Whether you are looking for new or used, you can find a Mini for sale at Carson Cars. We are proud to offer the best new and used Minis for sale in Lynnwood, Wa. Come in speak with one of our friendly sales professionals today.