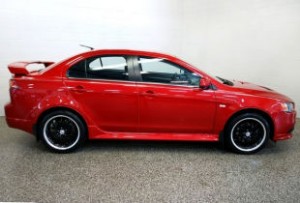 Mitsubishi debuted the 500 in the early 60s and later developed a larger inventory of passenger cars like the 360 van and pickup.

The company was officially named the Mitsubishi Motors Corporation in the early 70s and then sold fifteen percent of the corporation to Chrysler. The first product of the union was the Colt which was exported to the U.S. as a Dodge vehicle. At the decade’s end, there were more than a million Mitsubishi vehicles being sold every year.

The company’s vehicles were finally sold in the United States with the Mitsubishi brand in the early 80s. Not long after the company launched the Mirage, the Starion and the Galant. By the end of the decade the Mitsubishi name was well know for its dependability. The introduction of the Eclipse, the 3000GT, and the Lancer, along with the reputation of the corporation enabled the company to greatly increase sales.

Chrysler merged with Daimler-Benz in the 1990s. The Mitsubishi brand was included in the merger however by the end of the decade the financial connection had been broken. After that the Mitsubishi corporation suffered some financial losses and problems with vehicle defects.

When you’re looking for the best Mitsubishi For Sale in Lynnwood, Wa. area come in to see us at Carson Cars. Our friend service professionals would be happy to answer all of your questions about the Mitsubishi brand. If you’re in need of financing, we have a product that can work with any situation. Call us today for an appointment 425-697-6969 or you can stop by and see us.